What you will find here

This tutorial will walk you through the process of designing, creating, testing, and configuring/installing a smart contract system for a multi-party identity attributes network. 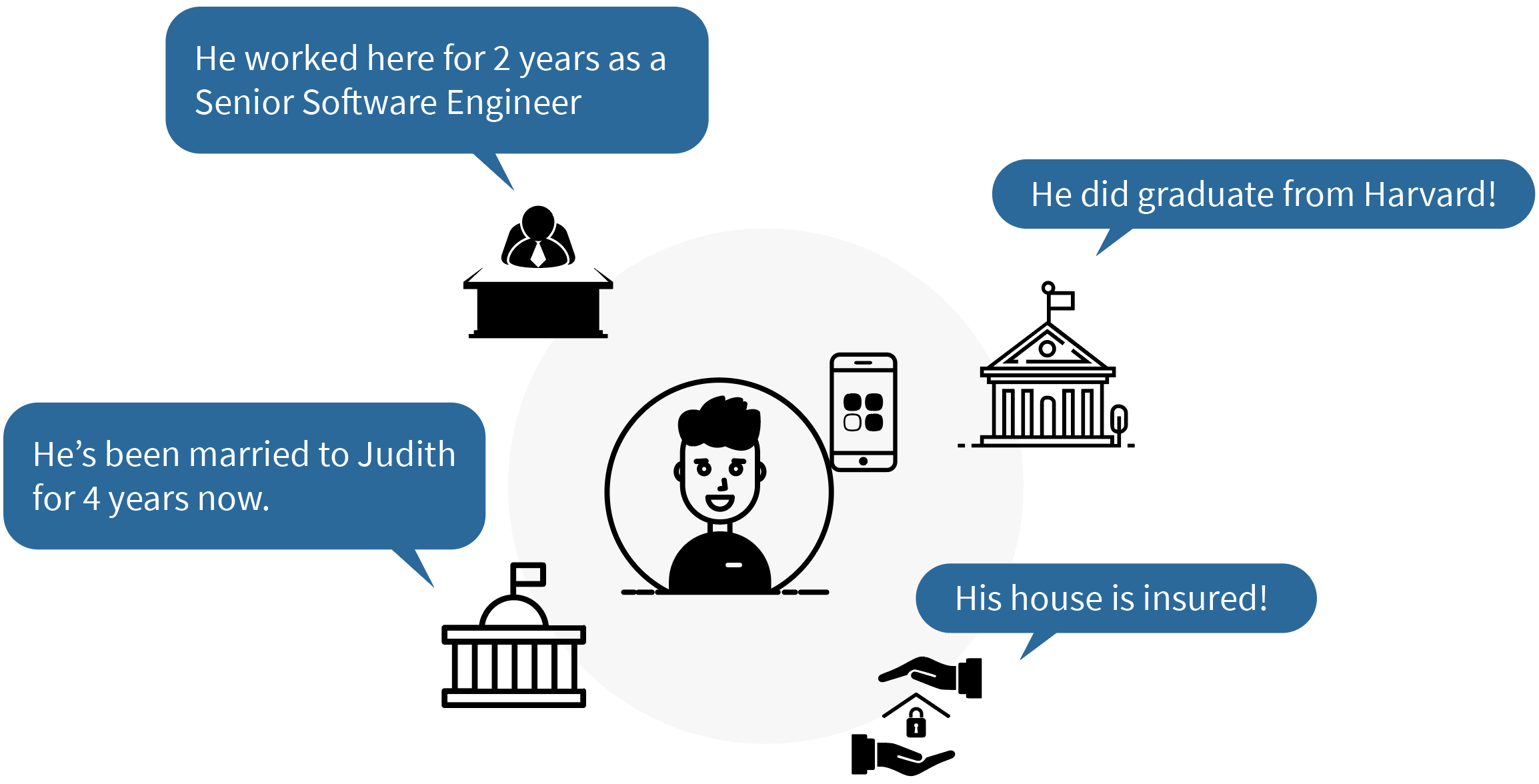 Imagine you never need to drag papers to certify a life event, or even have to call the certifier (a University, government, employer) for people to believe you. Just one app connected to a blockchain network!

Hopefully after this tutorial you will be ready to go and create your own enterprise smart contract systems.

These dependencies come from Hyperledger Fabric directly as it runs well on Node 8.x. And Docker is used to get started with a local network as soon as possible.

We initially built Convector which could be added to Node projects for Fabric by importing its libraries, but we quickly realized thanks to the community than an easier way to get up and running was needed, se we created the Convector CLI. Soon after we noticed how much people struggled to go through Fabric scripts and tutorials to get the network up and running, so we took a small lib from Convector to create testing networks and we spin it out as Hurley.

That said, you can easily install both by running this:

We have noticed that Linux users sometimes face some difficulties, some related issues have been documented and referenced here please check them out before raising a new issue.

When you create a project with Convector CLI your project will have Hurley as a dependency, but installing it globally can give you much more flexibility.

This tutorial won't go through an extensive explanation of each tool, so please refer to their Github home pages to learn the basics and all of their commands. Convector CLI and Hurley.

Convector is based on Models and Controllers. As basic structures, you will add your data models in the *.model.ts files and your business logic in your *.controller.ts files. Read more on models and controllers on each corresponding DOCs page.

For our project, we would like to represent the following data structures somehow (it's a best practice to avoid skipping steps, so let's first think on the "what" and then the "how"):

Network Participants should be fairly straight forward to represent as there are already patterns for managing identities in the network with Convector on Hyperledger Fabric.

In the case of Person we will need to think the logic better. In our business requirements we need the ability to:

The flow is quite simple:

From a software design perspective, it'd be helpful if you have two packages that get merged into a single smart contract.

This way, you can keep the logic of Network Participants separate from your Person and Attributes logic.

To start a new project, go to a folder where you'd like the project to be created (the cli will create its own folder to contain all the source code).

Open that folder attributesDb with your preferred code editor and let's explore the contents.

Inside of your project folder root, add a new chaincode for managing the Network Participants (organizations)

This created a new folder in your ./packages path with a boostrapped package. 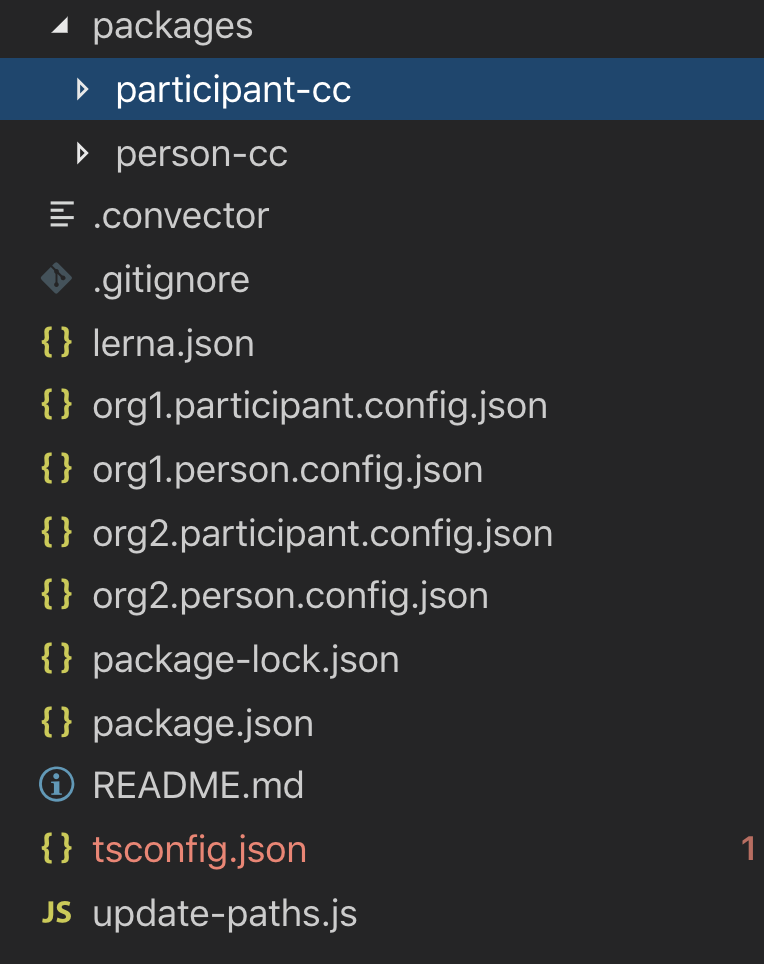 Please notice that in newer versions of the CLI now there's just one *.config.json file per smart contract. The orgs like org1 and org2 piece in the name of the file are not needed anymore.

Since your Person controller will have logic from your Participants, for example to check if a request is authorized or not, you need to include the participant-cc package as a dependency for your person-cc package.

Now, your person-cc controller can share logic with your participant-cc.

As stated before this example will use the logic from this identity pattern to handle participants (the repo really explanatory, so please refer to it for further details about this pattern).

In our project we will replace the following files with these contents inside of the participant-cc/src folder.

What's the overall behavior of this identity pattern?

Head to ./packages/person-cc/src/person.model.ts and change it to reflect our Person model.

By default, classes that extend the ConvectorModel type get some default capabilities and properties, like an id and a type, as well as the feature to talk to the ledger, read more here.

We will need an  Attributes array inside of the Person model. Attributes will be filled by Network Participants.

In the case of the Person, let's keep it simple with just the default "id" field, "name", and the array of attributes.

See those interesting properties on top of the properties of the model?  I.e.: @Default(false)

These are called decorators and are used to define some lightweight validation rules. So instead of doing an if statement to see if a field is empty, you can simple add a decorator right from the model. This will save you a lot of troubles and headaches as in Fabric values and params are always strings that you need to parse and validate manually. Not with Convector 😎. Read more about this here.

The controller is where the actual logic of your business network resides.

We can think of some rules that the controller should have as well as some functions.

Let's turn this logic into code:

A few things to notice from this class:

Now, what about the function to add attributes?

Following the logic we previously defined, we need to verify that the stated identity in the attribute actually belong to the wallet making the request. We use the Participant controller for that matter. After all validations are okay, we can check whether or not the attribute already existed and if we can update it with the current wallet that made the request.

This looks fine, but how can we validate this? Do we need a heavy blockchain network to do so? The answer is not! Let's add Unit tests.

We encourage unit tests always. Even for simple code. It's the way to make sure your code base grows healthy. We use mocha and chai for unit tests but you could technically use whatever you prefer.

If you'd like more details on how to do unit tests and why - read this blog post from our Medium.

For this case, we'd like to validate a few things:

Go to your ./packages/person-cc/tests/person.spec.ts and we will replace that content.

We will need to install a package called chai-as-promised that will allow us to make easier unit tests for asynchronous code (our smart contract).

Let's add chai-as-promised into our code. Your top dependencies should look like this:

We are importing Participant, Attributes, and People into the same unit test. This unit test will create a Mock adapter (fake ledger) that won't require a blockchain network but that by emulating a ledger we can check our logic working by adding and retrieving data.

This unit test can be automated in your Continuous Integration and Continuous Delivery process.

Since Convector 1.3 the new way to make external calls to the smart contract (from a unit test, a nodejs server, etc) is throught a ClientFactory. This will inject the right layer where the code is running and help us reuse our codebase.

At the end of this exercise we have the full test file so that you can see how to configure it.

1. Check that the government identity is validated correctly when adding people

Notice that test uses eventually, that is brought to the class by chai-as-promised. We simply expect the function .create to fail, as this is the first function we call and there should not be a government Network Participant.

We will use the identity that the Mock ledger brings by default (we don't need to do anything extra, just make calls).

It will call register and assign the current identity as the wallet for the Government identity.

We tried to create a person before, but we failed since just the government account can do and we didn't create it before, but since now we have, let's try it again.

4. Add an attribute as the Government

We will add -with the government wallet- a "birth-year" attribute. The contents will be just a simple string.

This organization cannot create new people but can add attributes. Let's validate both.

6. Finally, validate that it can add attribute but not modify the ones that it did not create

Notice that in this case, the attribute is more complex than the birth-year we added before, now it can be an object.

The final function will expect a rejection as it will try to change the birth-year, added initially by the government account.

With this, we can automatically test after codes are made to the code that it still does what we expect.

Once you have the whole file pasted in your project. Run this to execute the unit test:

We have created two controllers and validated the business logic correctly. But, it never actually ran in the blockchain. That is an advantage as you can code and test without depending on a heavy multi-containered environment however we're sure you can't wait to run it in an actual blockchain.

We created a multi-controller smart contract but we need to configure it accordingly to compile it as a package for the blockchain. More details on this here.

In a nutshell, we need to modify the file ./org1.person.config.json to also include the Participant controller and merge it into a single smart contract package. Pay special attention to the "controllers" section.

Please notice that in newer versions of the CLI now there's just one *.config.json file per smart contract. The orgs like org1 and org2 piece in the name of the file are not needed anymore.

Modify its contents for this (special attention on the controllers array):

This file will be read by a task (cc:package) in your ./package.json when compiling (before installing the smart contract). More on the default tasks here. These tasks will make your life easier by abstracting some commands behind the scenes, like using Hurley for your Development Environment.

Make sure that you met the pre-requisites and if you are using Linux that you read the common issues page. Then let's start a development blockchain network on Docker and install the smart contract:

Congratulations! You have a smart contract running in your computer!

Now that we have our smart contract running successfully, we can proceed to make some calls directly to the blockchain. We will use Hurley for this task to make things easier!

You can always go to http://localhost:5084/_utils/#database/ch1_person and see the data provisioned in the WorldState for you (the world state is a read-only version of the latest version of the data in the ledger - you don't modify the ledger by changing data there). 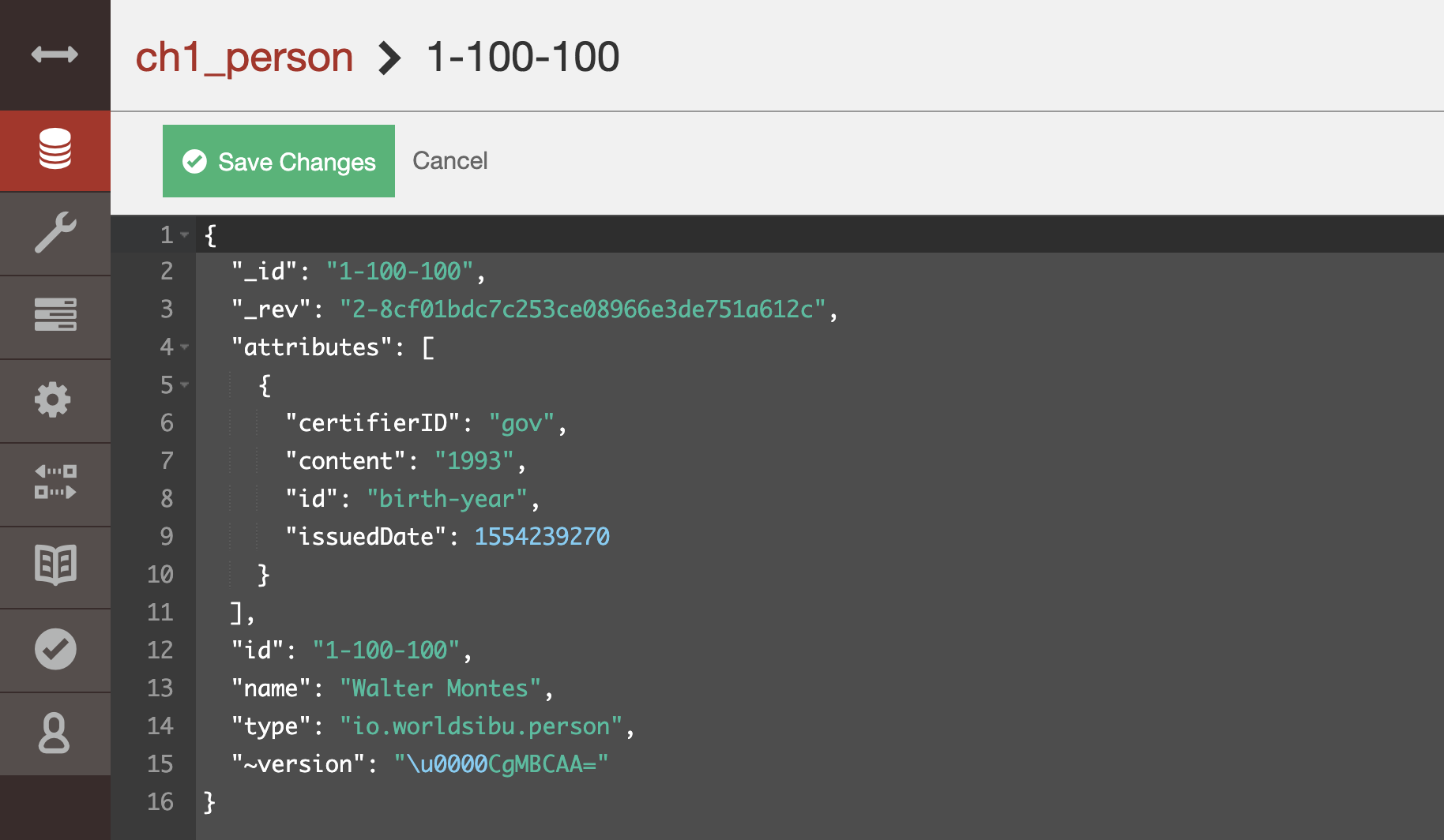 Congratulations you have successfully finished this tutorial! Remember to join the community if you haven't already.

The full source code is here.

Did this answer your question? Thanks for the feedback There was a problem submitting your feedback. Please try again later.